DJI’s single-handed gimbals have gotten bigger and bigger to accommodate the growing variety of mirrorless cameras. Weight has been reduced by using carbon etc., but it has also become expensive.

As the weight that can be carried increases, you will want to put the camera on the rig, and you will also want to attach the focus motor and transmitter, and so on.

But not all users want one-size-fits-all. I feel that there is a need for something that can be easily carried around, can be taken out quickly, and can be held for a certain amount of time without being a burden, as it is a single focus lens and can be used with camera AF.

If Vloggers who have been shooting with a combination like smartphone + Osmo Mobile until now are going to mirrorless, the RS 3 is a bit of a hurdle. In such a case, this gimbal with the name “Mini” may be welcomed with familiarity.

The impression of the size in the unfolded state where the camera is placed is about 70% of the RS 3 Pro.

In terms of weight, the RS 3 Pro is 415mm high and the RS 3 Mini is 396mm high. The RS 3 Pro and RS 3 don’t give the impression that they’re so compact because the length of the grip doesn’t change that much, but the length of the arm changes. Even so, it’s still big enough for me, who is a bit bloated, to pick it up.

In terms of weight, the RS 3 Pro weighs 1.5 kg and the RS 3 Mini weighs 850 g, so the impression I got is quite different. Both without tripod grip. In most cases, I often shoot with this tripod and extension grip attached, but the Mini is smaller and lighter in that part, and the RS 3 Pro is 226g, and the RS 3 Mini is 128g, which is also close to 100g here. It’s nice to be lighter.

Even more noteworthy is the capability of shooting vertical images, called vertical mode. With one less part, the RS 3 Mini has a weight of 795g, which is less than 800g. The claim is that this is half the weight of the RS 3 Pro, which can be replaced with an optional camera mount.

This RS 3 Mini is designed with the needs of vertical resolution in mind, as the photo of the vertical mode is used for the package photo. Until now, vertical video has been a monopoly on smartphones, but for vloggers and videographers who feel unsatisfied with smartphone cameras and want to shoot in a casual way, it may be a perfect spec.

Now, let’s see the difference between RS 3 Pro and RS 3 Mini when changing to vertical mode.

RS 3 Pro (also RS 3 and RS 2) needed an optional part called DJI R vertical mount (4,840 yen) when shooting vertical video. Since it is designed to replace a normal horizontal camera mount, the total weight does not change much.

Up until now, there was also a vertical video shooting mode without optional parts, but it was rarely used due to poor balance and limited movement.

The tilt axis arm setting plays a role in this vertical mode.

However, opinions on this matter are divided. Although it has been successful in reducing weight, the front-to-rear balance is basically fine-tuned each time the lens is changed. It was easy to use and helped shorten the setting time. Four adjustments are required to set the gimbal.

Another feature that the RS 3 Pro and RS 3 have but not the RS 3 Mini is automatic axis locking.

The gimbal drains the battery because it keeps its motor running all the time when balancing. Regarding the RS 3, there was a function to return and lock the three axes to the home point with a single button. It’s a bit disappointing that the RS 3 Mini, which has a small battery capacity, should have a feature.

I think these are the parts that were sacrificed to realize light weight & miniaturization and low cost. It’s certainly convenient to have, but there’s no problem without it. The price has been reduced to 51,480 yen including tax by omitting parts that you would not use even if you had them. This feels cheap compared to RS 3’s 72,600 yen and RS 3 Pro’s 108,900 yen.

And by the way, the NATO ports on both sides of the main unit are now only on the left side. Electronic contacts have been abolished, but there should be no problem with attaching a smartphone holder or connecting an external monitor.

However, what I thought was good about the new adoption of the RS 3 Mini, as well as the two-layer plate, is the protrusion on the quick release part that is installed on the camera. I’ve been using the RS 2 for a long time, and the biggest problem I felt was that the contact point with the camera was only one. The RS 3 Mini was the first to use a protrusion shaped like a lens support. Due to this, it is possible to suppress the twist peculiar to the single-clamp by bringing it into contact with the camera body.

However, there may be many people who feel uneasy even though the maximum loading weight is 2 kg.

The ¥ combination of Sony α7 series and FE 24-70mm F2.8 GM is roughly about 1.5kg. Manufacturers also want to pursue miniaturization and weight reduction, but I think that clearing this combination, which is a mirrorless high-end setting that uses a gimbal, was set as a target value.

However, this time, when I tested it with a camera that weighs about 1.2 kg, such as the Fujifilm X-T3 + 16-55mm F2.8, I got the impression that it was barely balanced. However, users who use such GM lenses are wise to use the RS 3 Pro. The maximum weight is considered to be used in a completely balanced state, so even if you move the zoom, attach a filter, or change the opening angle of the liquid crystal, it will shift. Rather than being distracted by such trivial things, it is safer to suppress it with over-spec power.

It is suitable for shooting with a single lens even for VLOGCAM and mirrorless. With such a load weight, the stable gimbal work peculiar to DJI demonstrates its ability. If you don’t need extra functions and think about mobility with a simple configuration, you can add it to one of the options. 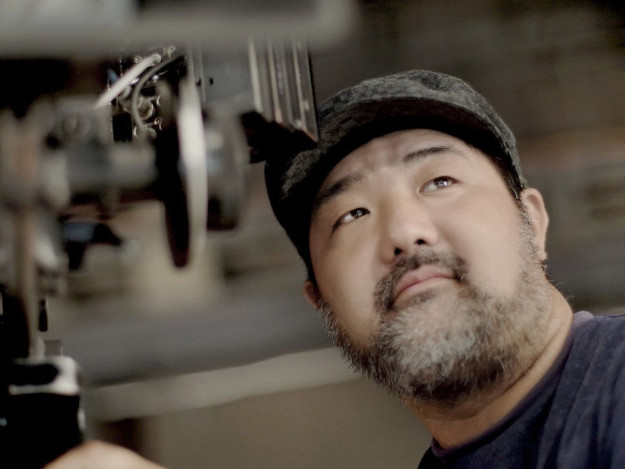 A cinematographer who is active in a wide range of fields, including commercials, music videos, movies, and dramas. He has a deep knowledge of the latest shooting technology and is also active as the CTO of the xR solution company Chapter 9.