Let's take a look at the latest entry into Canon's esteemed EOS line of digital cameras! 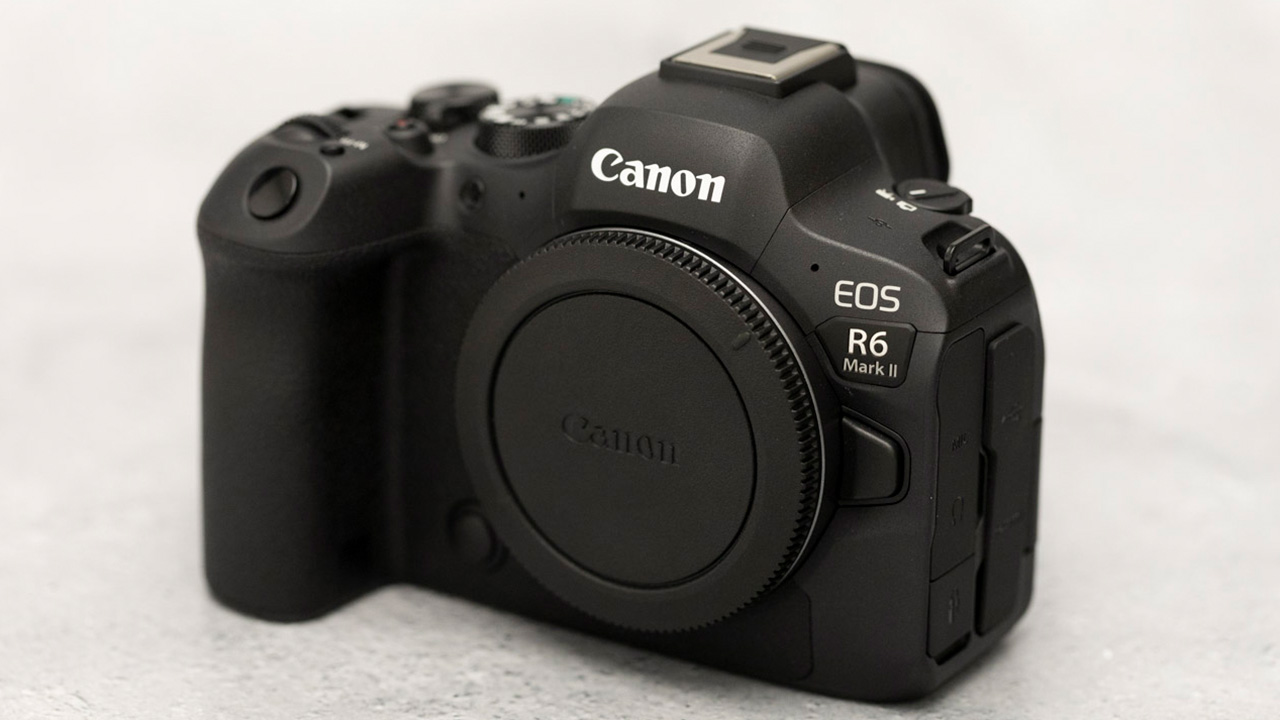 Canon will release the Mark II, the first R system in the middle class of cameras. It can be seen that Canon’s cautious development stance in the fact the EOS R6 type 2, which is released a little later than the EOS R5, will be released first. As an EOS R5 professional user, I have a good impression already.

Canon has allowed Sony to take the lead in the field of the mirrorless market, so it was necessary to throw a stone with a big impact with this camera. Back in 2020, the simultaneous announcement of the next-generation mirrorless cameras of EOS R5 and R6 still remains a vivid memory…and both were hugely successful. In this review, I would like to look forward to the development of each of the two middle-class signboards of the R system, carefully, rationally, and evolving at an accelerated pace.

First, let’s report on this machine, which will be the first Mark II.

Without further ado, let’s compare the appearance. The feature of the EOS 6 series is that there is no top display panel.

And the EOS R6 Mark II this time is equipped with a stills and movie switch, and along with that, the lock button has been removed and integrated into the ON/OFF switch.

I tried installing a camera cage compatible with R5 and R6. They were completely identical down to the arrangement of the accessory positioning holes.

It can be said that the specification change around here is a happy inheritance design because it is only a user demerit. However, the Cinderella fit type cage (SmallRig Black Mamba model) could not be installed due to the difference in height of the warship.

The above switches have been changed, the height of the warship has increased slightly, and the hot shoe has become a multi-accessory shoe.

Let’s take a look at the enhanced features. Based on the prototype, I verified the points that I think are particularly important from the point of view of the author who is an R system user and a cinematographer.

Also, even when shooting at 4K60P, it is possible to shoot for around 40 minutes without cropping and around 50 minutes with cropping. This means that as a full-frame machine, the performance is exactly the same as the EOS R3, and considering the small size of the housing, it can be said that it is an amazing long-time recording performance for a full-frame sensor. On the contrary, I even feel that the R3 has more than enough power left. However, in this regard, it falls far short of the EOS R7, which is an APS-C machine (* See previous article focusing on long-time recording performance) .

If there is one point that worries me, it will be the operation when using external output. The fact that the recording mark always lights up when HDMI is output, and the fact that recording to the main unit is not possible when displaying simultaneously with the rear LCD is a limitation not found in high-end models such as EOS R5 and R3. These limitations are of course also seen in the EOS R7, but I would like to leave it to the user how to perceive this area as a camera that sold 400,000 yen.

The highlight of the additional features, for me personally, is highlighting. The reason is that the recording display of EOS was poor visibility with only a small “REC” displayed in the upper right. It was designed to be a completely blind spot if you looked into it from above at a low angle. All models are now vari-angle compatible, but before that there was no interface with a higher risk of reverse rec with the embedded liquid crystal. Depending on the environment, it is no exaggeration to say that it is practically difficult to completely prevent reverse rec with the EOS system, even for seasoned veterans. Even if you are a consumer, there will be plenty of shooting opportunities that you absolutely do not want to make mistakes, so the significance of this highlighting correspondence is very great.

Also, in terms of support for highlighting, only Canon, which is a latecomer following Panasonic, Sony, and Fujifilm, has firmly incorporated improvement elements. As you can see, the display is not flickering, but rather has a fade-in effect, which is expected not only to prevent reverse rec errors, but also not to interfere with framing or adversely affect the sense of color. I felt that it was the above finish.

If I were to mention a different angle, now that the manufacturer has realized the necessity and importance of highlighting, I would like to see the EOS R3, the top model of the current R system, quickly support the firmware.

Another feature is the breathing correction. Breathing is a symptom in which the angle of view shifts slightly as the focus shifts, but basically it occurs with any lens, and is more noticeable with large-aperture lenses. Although it is not a symptom to worry about in still photography that cuts out one frame, it is an important factor in video production, and cinema lenses designed exclusively for breathingless are supplied at high prices. It is a mechanism that crops the changing angle of view in advance and controls it. Only works with compatible lenses and firmware.

This time, we tested the operation with the RF 135mm F1.8 L IS USM, which was also announced as a new product.

As you can see, there is a slight crop, but the difference is noticeable. Unless you check the details on a 4K monitor in a very severe manner, the deterioration in image quality will not be noticeable. I was impressed that the world has finally become convenient to be able to operate a large-aperture lens with a breathingless design so easily.

Cinema-designed lenses are, in principle, manual focus and are very expensive. However, from now on, it will be possible to operate the high-performance tracking AF of the EOS R system with a large aperture depth of field without breathing. It can be said that the breathing correction function, which was installed in Canon following the Sony α7 IV, is a paradigm shift brought about by the evolution of software.

From here, let’s take a look at the strengths (sensor and processing engine performance) of the EOS R6 Mark II. Recent cameras have excellent high-sensitivity performance, but among them, the number of pixels sensor is the same as that of EOS R3, so expectations are growing. 4K shooting data from 800 to 25600, which is the recommended minimum ISO when shooting Canon Log 3, is below. If possible, please check it on a 4K monitor.

It is true that noise starts to become noticeable after ISO3200, but what is surprising is that even after ISO12800, the image is sufficiently clean and details are almost perfectly maintained. If this is the case, it may be enough to use even around ISO 16000 depending on the application just by applying simple post-processing. I didn’t make a detailed comparison with the EOS R3, but I felt that it was at the same level as a sensory value.

EOS R5 has a large difference in the tendency of noise to occur between 10bit and 8bit. In some cases, I dared to shoot in 8-bit to simplify post-processing. However, with the EOS R6 Mark II, it doesn’t seem to be necessary like the R3. For ease of comparison, I prepared a capture of the noise reduction screen on Neat Video.

As you can see, when the shooting data is previewed normally, the detail seems to be preserved up to ISO25600. When I use Neat Video’s assist display, the material with large data corruption seems to be around ISO20000.

As a sub-machine of the EOS R3, I felt that it had performance that was completely comparable to that of a full-frame camera, such as long-time recording, highlighting, and so on. Depending on the situation, it can be used as a main machine, and it has high AF performance and sensitivity performance that are especially suitable for videographers beginners, and it is equipped with a reverse rec countermeasure highlighting that leads to serious mistakes even though it is a careless mistake.

As a point of caution, I would caution about operating this camera like a PTZ camera with a gimbal such as Ronin, or by by external output. Operation as a distribution recording camera is incompatible. Also, it should be noted that there is no ALL-I as a recording format, and the basic IPB is used for shooting.

Especially when performing full-scale operation, the ATOMOS NINJA V+ required for external RAW output…That will be a separate 140,000 yen class external recorder, so if you have many opportunities to record RAW, waiting for the EOS R5 Mark II is also a powerful option. I feel. However, it seems necessary to carefully consider how the effect of increasing the number of pixels will affect. I look forward to future information.

Well, I’ve introduced it from the viewpoint of video production, but the results of breathing correction etc. gave a glimpse of the paradigm shift due to the evolution of software. The EOS R6 Mark II has performance that is as close as possible to the EOS R3, and can be said to be a very complete and formidable machine, except for limitations such as internal RAW recording and external output. Battery life has also been considerably improved, making it a full-fledged camera capable of everything from full-fledged still photography to movie production while making the most of its mobility.

Originally written in Japanese language by Nick Tsutomu
After retiring as a restaurant chef, he worked at an IT production company. His strengths include flexible and accurate supervision of everything from stills to movie aerial photography, mainly for small and medium-sized shooting regardless of commercial records in various genres such as hotels, restaurants, weddings, real estate, stage performances, events, entertainment, movies, and commercials. there is Based on his experience as a photography instructor at a beauty school and his connections with bridal make-up studios, he also offers hair and make-up suitable for each genre. He likes saunas and beer.